Tens of thousands of New Yorkers are demanding great schools for all children. Join us.

New York City's schools are separate and unequal. They tell a Tale of Two School Systems.

One system is for mostly white and Asian students, who have access to the city's top elementary schools and advance on a path of prosperity to the few top middle and high schools.

The other system is bigger and bleaker -- and almost entirely for children of color. In New York City's 850 lowest-performing schools, nine out of every ten children are Black or Hispanic. These schools funnel our most at-risk kids through a pipeline of failing elementary schools, failing middle schools, and failing high schools -- before abandoning them on the precipice of poverty.

The scope of this educational inequality is staggering. The schools in New York City's pipeline to failure -- which enroll 478,000 students -- serve a population of children larger than the entire Chicago Public School system.

We must do better to bridge the divide between New York City's separate and unequal school systems. Breaking down barriers between the haves and have-nots in our schools will require bold, new action. It's time for New Yorkers to come together and demand great schools for ALL our kids -- not just the select few. 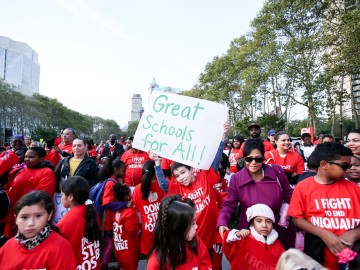 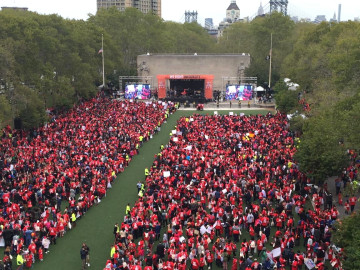 Black and Hispanic kids in New York City’s worst schools are five times more likely to get stopped by the police than attend a quality middle school.

There are 478,000 children — mostly Black and Hispanic — stuck in New York City’s lowest-performing schools, where 90% of students can’t read or do math at grade level. That’s more than the entire student body of Chicago Public Schools.

New York City’s schools are separate and unequal. 90% of kids in the city’s worst schools are Black or Hispanic.